There's a Chinese phrase, 緣分, yuan fen, which roughly translates to a cross between attraction/connection and fate/destiny. We have yuan, whether negative or positive, with our family--some believe across several lifetimes. Taiwanese parents are known to say to their child, "Ay, I must have owed you from my last lifetime."

Yuan is present between best friends, chance encounters that turn into lifelong friendships or marriages, business partners, and authors and presses. I do believe yuan is reponsible for Red Hen becoming my publisher. Here's why.

My daughter really likes the book The Little Red Hen, though she prefers the pizza-making version of it. The book was also the first book in English my father read in the Pingtung library in southern Taiwan, once upon a time, before his X contribution to my XX chromosomes had been formed. (There's also some uncertainty about whether the red chicken in question was male or female in the book, but this only makes a good story if the hen's a hen, not a...)

When I asked Red Hen Press the reason for their name, the origin story turned out to be a Little Red Hen story as well. The founders had thought, "If nobody else will do it [it being publish high quality literature that may not be mass market], then I will!"

The former incarnation of my book was contracted for 5 years before that didn't work out, and then I was on submission for a few more years, during which my mother fell ill and eventually passed. Not long after her passing, two publishers expressed interest (something like a year after my manuscript submissions), Red Hen being one of them. My first response was, Thanks, Mom, because grief can make one superstitious. As for which publisher was the one, the answer was pretty obvious due to the numerous other Red Hen references above. If my life were fiction, the symbolism would have been criticized in workshop as "overwhelmingly obvious," "heavyhanded," etc.

The entire team at Red Hen has been supportive and helpful these past few years: they made cute copies of my book, complete with sexy bookmarks, brought my books to AWP when I couldn't be there, and recently I received this card and lovely signed copy of my book from the entire staff at Red Hen. 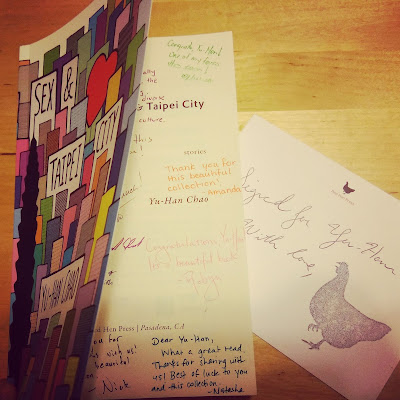 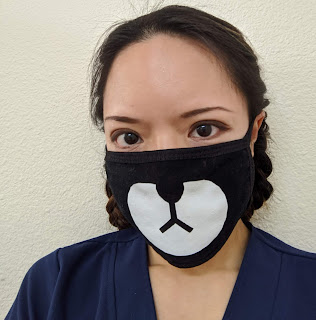