DNA, Deoxyribonucleic Acid, blueprint molecules for everything that makes you you. Race/ethnicity isn't a biological thing present in your DNA, however.

There's a lot we don't know about the estimated 20,000 or so genes present on our 23 chromosomes and the simple and complex traits they govern. We do know that genes coding for superficial traits such as skin, hair, and eye color, are just that--superficial. Scientists argue that race (e.g. African, Asian) is a social construct because there aren't genes only present in Africans or only present in Asians and not present in other "races," and there aren't genes present in all members of a particular "race," either. Two people from the same perceived race can be as genetically different as two people from different races.

So there's something insidious about these ancestry sites that analyze your DNA and tell you what percentage you are of which ancestry. What these sites are calling Irish, European, or Chinese "ancestry" markers are genes that became more common in certain populations for geographic reasons. When black-haired people have babies with black-haired people in a particular region, those black-haired genes accumulate in the local gene pool. There are no Irish, European, or Chinese genes absolutely proving ancestry, but simply genes more commonly seen in those regions. Someone living in another different part of the world could have those same genes as well without being from that region. Claims of ancestry ID can be a misleading game of statistics.

The above's really a disclaimer because I fell for the DNA analysis thing, too, though there's no need for a lab to tell me I'm 100% Asian. Perhaps the "no data available" segments are what's interesting here. 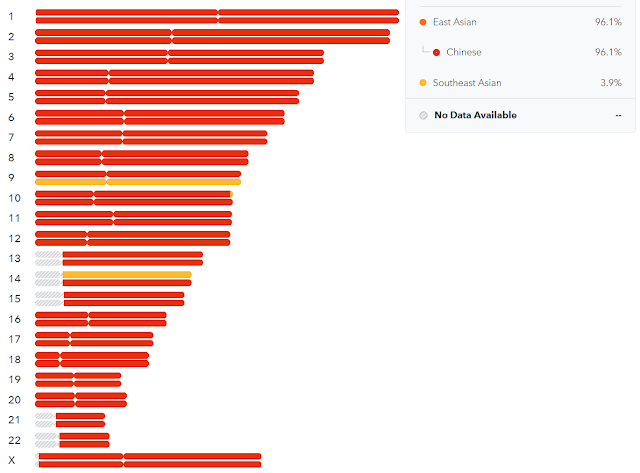