Matrescence = a woman's transition into parenthood

The term, "matrescence," coined by anthropologist Dana Raphael in the 1970s, describes the process of becoming a mother, just as adolescence indicates one's passage into adulthood. Incidentally, a woman's breasts are not fully developed until pregnancy (I'll take my not-fully-developed ones back anytime).

Of course, there's "patrescence" as well, and there are stages the expectant father and new father go through, such as announcement, moratorium, focusing, engrossment, etc., but that is simply not the same as having your body stretched out, all systems taxed for 9-10 months, several hours to days of labor, having your vagina ripped open (sometimes all the way to the anus, in a fourth degree tear), and after all that maybe still having your belly sliced open like a watermelon in an emergency C section that leaves you debilitated for days, though that in no way excuses you from taking care of the baby 24-7. 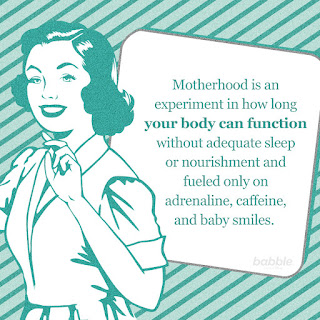 The baby is waiting for you to be a full time human pacifier, and while baby sleeps, you deal with nipples permanently ballooned to twice their original size by merciless hand pumps that operate like reverse water guns drawing out warm human milk and nipple skin/flesh. If the pumps stop working, you manually express painful, clogged milk ducts that have become rock hard and infected, now that you are both human cow and milkmaid. Sleep is the ultimate fantasy, but that's the wrong genre, because the reality's more horror than anything else.

In Taiwan, post-childbirth, women are supposed to be pampered in five-star, postpartum centers, their babies cared for by nurses for the first month as mommy recovers and eats specially prepared meals and Chinese herbs, and she can choose to breastfeed or not based on her preference. Various lactation professionals forbade me from supplementing with formula and threatened that my baby would die of SIDS if I expressed milk and used a bottle instead of personally feeding her all day (& all night) long. I was hungry, tired, in pain, oozing grape jelly from my C section incision, but at least my daughter was plump and well fed. The textbooks say, a woman's satisfaction with her birth experience is directly influenced by her expectations v. what actually happens. The reality I experienced was not a five-star hotel, but the horror flick, Hostel.

Our textbooks tell us that postpartum blues are "normal" and "common"--"most women experience postpartum blues." Is that really so "normal"? Is that not instead an indication of what's wrong with our society and the roles it forces women to take on? And the textbook definition/diagnosis of baby blues is only upgraded to postpartum depression if the woman is "unable to care for herself and her baby" and "needs psychiatric help." That's a lot of gray area. And some of us will take care of the baby and not ourselves and never seek help because we've got no time--we're back at work when we're not feeding the baby, and passed out in the moments in between.

I love my daughter more than anyone on earth, but I will not glorify the term, "matrescence," as some kind of zen-like period of enlightenment in which I realize and come to terms with my life's mission and purpose because (my boobs &) I have finally matured into a real woman by becoming a mother.

How about some practical support for women, accommodations/paid leave in the workplace, free nurse visits at home to help out with the baby like they have in Holland? We don't need fairy tales glorifying motherhood; we need help so "most" of us don't end up with postpartum blues or PTSD while textbooks tell future nurses and doctors that it's all normal, just a case of the hormones.
Labels: Gender Motherhood