In the Middle Ages, people with mental illness were sent off into the open sea in a sailing boat to search for their lost rationality.

The ship of fools is a Bosch painting, the title of several songs, and the name of a few modern films. In The Republic, Plato describes a gang of foolish sailors who take possession of a ship, chain up the captain and throw people they don't like overboard. More interesting, perhaps, is Foucault's discussion of Narrenschiff, ship of fools, in Madness and Civilization, as the symbol of the (changing) status of madness.

Madness was fascinating because it was unknown, and the "madman" seemed to possess some kind of forbidden knowledge that related to the end of the world. Madness, like death, was a mystery, and in a religious era, that also became linked to the theme of apocalypse.

That's what Bird Box was about, right? That maybe "mad" people aren't actually mad, but are the only ones who saw the truth this entire time, and we are fools on a ship or blind people in a cave who chemically restrain them with haldol-benadryl-ativan, give them a diagnosis from the Diagnostic and Statistical Manual of Mental Disorders (DSM-5) and silence them. If we only saw what they've been seeing their entire lives, we'd instantly develop suicidal ideation, a lethal plan, and carry it out.

Foucault describes the classical period (couple centuries after the Middle Ages and a couple centuries before us) as being more tolerant towards madness than our modern times, and this seems fair. While we are all just one (really awful) trigger away from full-blown mental illness, our society marginalizes psych patients in locked facilities while cheerfully using them as plot devices (or to just scare people really bad) in popular entertainment. They're in ships that don't sail, in stories that aren't real.

The truth is, most of us folk without psych diagnoses are lost at sea quite a lot of the time, too. We cope, is all.

And denial's a beautiful thing. 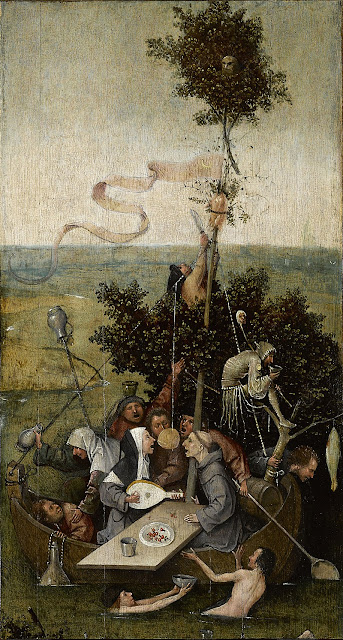