I've been trying to write this post for over a year, since my good friend passed away suddenly from two kinds of leukemia, myeloid and lymphoid, both acute. She was survived by two very young children, passing just days after she received the diagnosis, only months after having her second baby.

Every time I read or hear or see something I know my friend would appreciate and want to share whatever it is with her, only to realize I cannot anymore, I look up leukemia. What I seek is an answer to the universal question: Why? My friend was in her 30s, did yoga, ate healthy, even ran marathons. (I have not run a marathon in my life. Not one. Don't eat great or do yoga, either.)

Scientists are not sure what causes leukemia. Like most other cancers (besides lung cancer-- smoking is a pretty certain way to get lung cancer), the causes are a vague interaction of genetics, environment, and can't-catch-a-break.

If you look at the family tree of white blood cells below, you will see how if your myeloid and lymphoid progenitors are both messed up, that can quickly become incompatible with defending yourself against the lethal game called Life. It's like a choose your own adventure story where all the endings are (necessary to avoid) death. 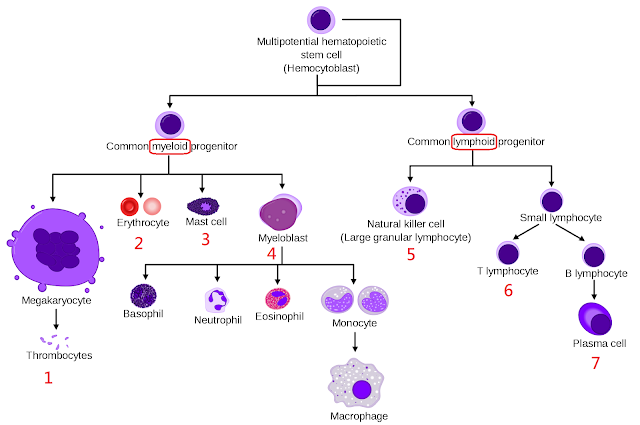 1. Without the megakaryocyte to shed thrombocytes (platelets), blood cannot clot. Bleeding out becomes a risk, sometimes internally, when there are no signs until it is too late.

2. Without erythrocytes (red blood cells), the body's cells lose their little friends that bring oxygen. Without oxygen for aerobic metabolism, cells have nowhere to go except downhill as it rains lactic acid.

4. Without the myeloblast, there are no basophils for inflammation (which can be protective sometimes), neutrophils to attack bacteria and fungi, eosinophils to get the parasites, or monocytes and macrophages to gobble up bad guys.

5. Without natural killer cells, who will poke holes in bad guys so they pop and spill their innards?

6. Without the T lymphocyte clone army, all is lost in the war against pathogens.

7. Without B lyphocytes and plasma cells, forget vaccination because there are no antibodies (or lemons) anyway.

With leukemia, not only does one not form normally functioning cell elements, the abnormal cells crowd out what functional cells remain, so all the above problems of bleeding and no immune system become worse.

And people lose their friends, their family, babies lose their Mommy.

Leukemia can be survivable, as seen in the case of Janice in episode 33 of Peanuts, "Why, Charlie Brown, Why?"

We still do not know why, Charlie Brown.
Labels: Grief Oncology