In Greek: mitos, thread; chondrion, granule. Mitochondrion have layered membranes, granulated appearance, and ATP synthases that generate energy through the Krebs cycle (every Bio 1 student's nightmare) or when things go wrong, anaerobic respiration (nightmare of anyone with a septic patient).

Before discussing mitochondria & their role in evolution, here's a disclaimer (that anyone involved in Core curriculum at UC Merced is familiar with). Evolution and creationism are not either/or. You can believe in God/Allah/____ and evolution at the same time. God/Creators are outside of time, so who's to say they did not create all matter & energy (E=mc^2 etc.), including life (through evolution) in 7 "days" (which could very well be 4.5 billion years)?

However evolution got started, mitochondria, one of the most awesome little powerhouses to ever appear on earth, are key to life as we know it. Mitochondria and the tree of life is more entertwined in its branches than some older textbooks led us to believe, however. 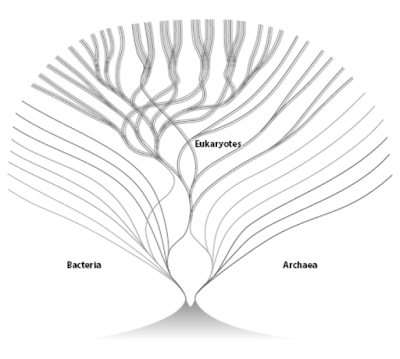 Based on carbon, minerals, fossils and other evidence, scientists have attempted to piece together the evolutionary puzzle, in spite of missing pieces, intermediate species. Not everything leaves a mark. Nick Lane, in his The Vital Question, discusses LECA, the last eukaryotic common ancestor, the origin of plants, fungi, and animals like us. Eukaryotes have a nuclei containing genetic material, and organelles (tiny cellular components, like organs) such as mitochondria.
The incredible thing is that one of the early single cell organisms on premordial earth swallowed an early mitochondria and decided to keep it rather than digest it. It was such an incredible generator of energy that it made it possible for the early organism to aspire to multicellularism--developing into a creature with more than one cell.
Some of these eukaryotes with mitochondria also swallowed an early organism that became a chloroplast, and was able to perform photosynthesis that made the Great Oxidation Event possible. Some little organisms created oxygen and carbs from CO2, while some, like us, used oxygen in cellular respiration to metabolize carbohydrates, and a few billion years later, here we all are. 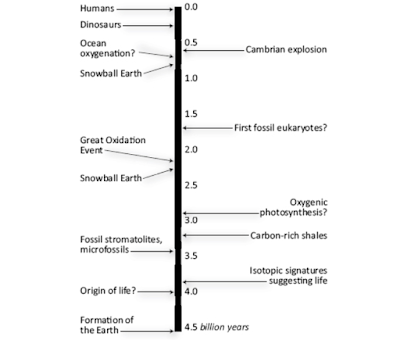 One of the most awesome things about mitochondria is your mitochondrial genes come from your mother, grandmother, great-grandmother, etc., because only the egg contributes mitochondria (RBG would approve). Any trace mitochondria that sneak in through sperm are targeted & destroyed by the egg. Nick Lane also discusses why this is an evolutionary trait that facilitates survival by decreasing incompatabilities between nuclear and mitocondrial genes or fatal mutations in mitochondrial genes.
Anyway, mitochondria are so amazing they deserve a few more posts, including an awesome book recommendation by my wise and well-read colleague, Sally, next time.
Reference:
Lane, Nick (2015), The Vital Question: Energy, Evolution, and the Origins of Complex Life. New York: W. W. Norton & Company.
Labels: Books History Myths & Fairytales