What's in a Uniform?

While uniforms may perpetuate stereotypes and differences in social status, they also remind us that underneath the fabric, we aren't all that different--those few alleles coding for skin tone and hair color/texture are nothing in the grand scheme of the human genome. In fact, we have far greater differences internally (blood type, e.g.) than externally (hair, skin).

Uniforms were a large part of my formative years, from kindergarten aprons and hats, sailor outfits in music school, hideous military-style khaki in junior high, to shirt, tie and pants/skirt in senior high. We even had uniform hair--I was one of the last generations of Taiwanese girls with 3-cm-under-the-earlobe regulation haircuts (boys had shaven heads). Sure, our faces looked different, but with other variables controlled (no makeup or piercings, socks and shoes regulated), we also appeared the same.

The uniforms were our identity. If one wore the dirt green shirt and black skirt of Taipei First Girls, people wondered, how did she get so smart? Uniformity and social structure were implied by dress code within the contest mobility system. Each school's uniform conveyed non-verbally one's status. Using Barthes's model in The Language of Fashion, the signifier is a particular school's uniform, and the signified the social status associated with that school, from the top boys' or girls' schools to what Taiwanese call the "grazing-cow classes."

After junior high, low-performing girls are encouraged to attend vocational nursing schools, so that they'd have a job to tide them over until they snag a doctor for husband. Nurses are afforded low social status in Taiwan. They work brutal hours, underpaid. There's an assumption, perhaps a gendered one, that it's a caring profession, and only those who love it can bear it. They are called, "angels in white," though they no longer wear white (the color of death and funerals).


All that aside, I love being back in uniform. It takes the pressure off being responsible for my clothing choices. It hides the shape of the body just enough that there's nothing to stare at, not much to compliment, very little to judge. Maybe people will finally see me for my profession first, rather than, "tiny little Asian girl." After all, we humans are almost all genetically identical except for a few internal and external differences, and uniforms remind us of that, just a little. 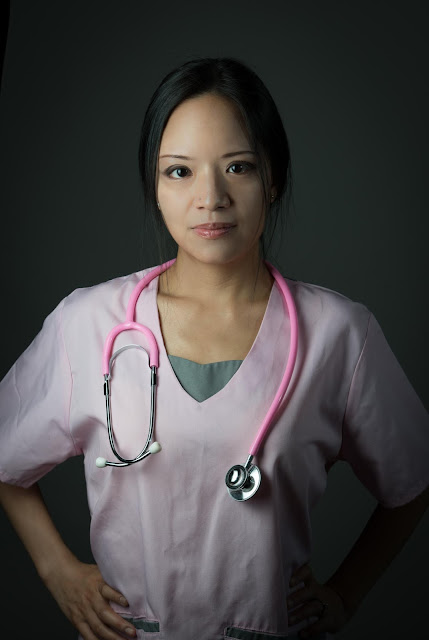