As a kid, I was convinced that glass thermometers, like needles, hurt. I lost my shit when the doctor busted out with a big honking needle.

I've only fainted once, in college, after a blood draw. It wasn't my fault, though, because I'd looked away, and when I looked back, the nurse was wiping up a puddle of bright red blood she'd spilled all over my medical form.

20% of the general population experience a fear of needles, according to Healthline.com. Needle phobia is a thing. It comes with its own terminology:

Trypanophobia: a fear of injections

Vaccinophobia: a fear of vaccines and vaccinations

This fear actually makes sense in terms of evolution. Heavy-handed symbolism aside, if, like Aurora on her sixteenth birthday, one sees a sharp, pointy thing and thinks, MUST TOUCH, one might not live to pass on one's genes.

I have no problem popping the blueberry-like, bulbous body of a large black widow under my thin flip-flops, but watching a medical personnel squeeze one drop of liquid out of the tip of a syringe activates my fight or flight (mostly flight) response.

Unfortunately, I've already signed the paperwork consenting to my nursing program classmates and I sticking one another for practice. I'll have to warn them that I might be crying the whole time.

Advice for overcoming phobias include gradual exposure to the object feared, looking at pictures/videos of it, talking about it, writing about it, and handling it (if possible, and safely). We'll see if any of that helps. 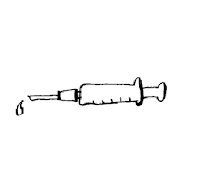