Viruses and vampires have several things in common. 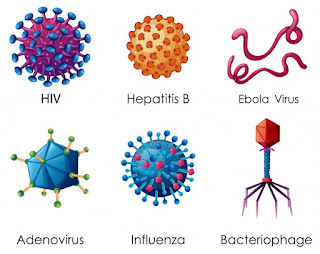 1. They're parasitic.
Vampires, according to Bram Stoker, folklore, and popular culture, live on human blood, fresh or synthetic, depending on your source. Viruses similarly cannot metabolize nutrients or reproduce on their own and instead rely on a host cell (hijacked by the virus) to make new viruses.

2. They're not alive.
Vampires are both not alive and undead at the same time, however that works. Viruses are also not alive, because they are inanimate, complex, organic matter, bits of protein and DNA or RNA that can't be killed because one can't kill something that was never alive, just like one can't kill a tetrahedron of cement with some tangled-up string inside.

3. They can spread.
Depending on what literature you read or what show/movie you're watching, vampires can "make" other vampires through various means--the traditional blood transfusion/ingestion method; some combination of sucking-dry, burying, digging-back-up and resuscitation; or in some allegorical versions, through sexual contact; even maternal/paternal lineage. Likewise, viruses can cross the placenta to the baby, live on fomites (contaminated objects, like doorknobs), be transmitted orally, through sexual contact, droplets in the air, etc. Once they find a new host, they use host resources to reproduce and expand their brood.

4. They are forever.
Vampires aren't alive, but they don't die, either (short of a wood-stake-in-the-heart, toxic-sun-bath, decapitation, or sacred-bullet-penetration type of situation). Vampires can live hundreds and hundreds of years, changing their dress to suit the current era, much like viruses have been around since before humans came into existence. In fact, viruses may be responsible for a great deal of evolution as it took place. Up to 50% of human DNA may have come from viruses, and the chickenpox, influenza, herpes, human papilloma and human immunodeficiency viruses that keep renewing themselves through tiny mutations always stay current with the times, keeping scientists busy with new flu vaccines and anti(retro)virals all the time. Viruses are forever, and will be around even when we're all dead and gone.

P.S. No, this is not what we're specifically discussing in nursing school at the moment. Maybe just viruses, and blood.

*In the show, True Blood, V is shorthand for vampire blood, a substance dealt like drugs by humans, who harvest it from vampires and sell it to human users who enjoy it for its meth, steroid & ecstacy-like effects.
Labels: DNA TV