In parts of Asia, people don't just consult the zodiac, star signs, and the eight numbers of one's birth (八字). There's an entire culture of personality decoding based on blood type. It all started in 1927 when Takeji Furukawa, a professor at Tokyo Women’s Teacher’s School, shared his research connecting personality traits with blood type. Since then, friends and romantic interests ask if one's A, B, AB, or O, and in Japan, people reportedly get discriminated against at school and work based on their blood type. 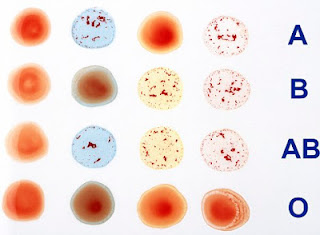 Correlation of personality with one's A, B, AB, or O blood has not been supported by many credible studies, but some people take this very seriously. If you know your blood type (and you really should), see if the traits below sound about right.

A: Contrary to the Western concept of a "type A personality," people with type A blood (and antigens) can take a long time doing something when they're not motivated, or finish the same task in a jiffy when they are. They dislike trouble, and say, "it's fine," when it's not fine at all. They're not quitters, and rarely change their mind after a decision. In fact, they hate last-minute changes. They're good listeners, are responsible, and are bad at saying no. If someone says, "you're the only one I can count on to do this," they instantly become exactly that.

B: When others are unmotivated, these people with type B antigens suddenly become filled with energy. When those around them are motivated, however, type Bs lose their will to act. They say, "after all," "doesn't matter," "whatever," a lot. Huge difference between a motivated type B and an unmotivated one--they won't touch something uninteresting to them. They will suddenly do meaningless things or research strange subjects. They like having their way and their space. Upon encountering someone they know while on vacation, they flee before spotted.

O: After receiving a compliment, these universal donors will work extra hard. In general, they lack motivation, but if inspired, they can achieve amazing things. They may give up at any point, however. They're not stuck on details; results matter. They're helpful, and may not seem petty, but are actually quite jealous. They follow their desires, not the plan. They'll listen to others but won't share their own troubles. They can analyze others' problems but make a mess of their own. They hate being criticized, hum when happy, and love having company.

AB: These emotional, universal recipients are like cats. Strangely insistent about certain rules, they can work as hard as anyone else. They dislike groups. They focus on things they love. They don't like to talk, and while they appear to be good listeners, they're not actually listening. They are knowledgeable, try to get along with others, and are talented but quirky. They cannot resist sweet talk.