Not everyone, even someone in the middle of a panic attack, realizes just how much anxiety can change us physically--temporarily. Actual visual fields decrease (tunnel vision is a real thing), and stress can turn into physical symptoms that, if sustained, may become hazardous. 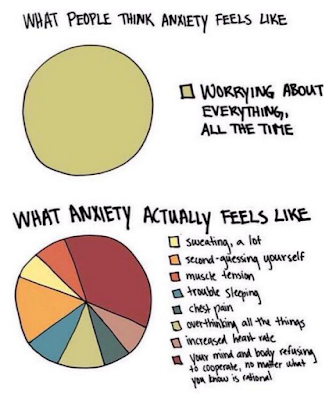 I. Mild Anxiety
Heightened perception, enhanced learning (yay!), restlessness, irritability, increased motivation. Possibly a good thing, all in all.
Public speaking scenario: You have to present to a small group of peers.
Nursing school scenario: You have a skills checkoff (or five) tomorrow.

II. Moderate Anxiety
Reduced vision field, reduced alertness, suboptimal learning. Ego defense mechanisms like denial or regression occur. Some physical symptoms such as faster heart rate, breathing, muscular tension and gastric discomfort occur.
Public speaking scenario: You have to present a speech to an entire class, while your Communications instructor times and grades you from the back of the room and is dinging you for every tiny mistake, including too many pauses, "um"s, and taking too little or too much time.
Nursing school scenario: It's clinical day. You just contaminated, and your instructor is staring.

III. Severe Anxiety
Greatly diminished visual field. Headache dizziness nausea shaking insomnia hyperventilation frequent urination diarrhea. Feeling of dread, horror.
Public speaking scenario: You have to speak to an auditorium full of people, alone, and you're doing this in a transparent white dress, from a backlit stage.
Nursing school scenario:You are in the ER alone as a preceptee, and something awful that you can't talk about walks in the door.

IV. Panic
Unable to focus on even one detail. Pupils dilated, breathing labored, shaking, sleepless, pale and sweaty, uncoordinated, incoherent. Sense of impending doom.
Public speaking scenario: You are speaking before the UN, and the future of the free world hinges on your performance. You forgot to prepare a speech. You are naked.
Nursing school scenario: Something awful that you can't talk about happens to you.
Labels: Mental Health