Fungi can hijack ant brains and turn them into zombies; humans have found Botfly larvae in their balls and Aspergillus (fungus) in breast implants. Infections may come from bacteria, viruses, fungi, or parasites. Human minds can also be afflicted, if not infected, by anxiety, fear, stress, trauma, and even romantic obsession.

Bacterial meningitis is much worse than viral meningitis, though they're both bad news. Viruses can wait on surfaces for hours, days, or weeks until a sucker picks them up and lets them in.

Yeast can grow in the mouth, or down there (a "superinfection"--oh no!) Athlete's foot doesn't always stay on the foot (jock itch, anyone?)

Given the choice, a lot of people would probably choose infection by practically-invisible microbes compared to larger, visible parasites: string-like worms, squirming larvae and such.

It takes a week to recover from a flu, two to get over a bad cold, and reportedly half the duration of a terminated relationship to get over it. Little scientific evidence exists to back up the final statement; in fact, it comes from Sex and the City. 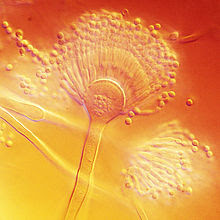 Make a wish on the pretty fungus (but don't inhale).

Labels: All the Meds