Some genetic and chromosomal diseases are serious, and lethal. In fact, most chromosomal anomalies result in spontaneous loss of the pregnancy, because human beings need to have more or less the same bits and functions to survive, even in utero.

With autosomal dominant diseases like Huntington's disease or Marfan's syndrome, children of the affected parents have 50% chance of developing loss of control over motion and cognition, or having Rachmaninoff-sized hands and eventually dying from a tear in a weakened aorta.

The recessive diseases require both parents to be carriers, and when two carriers meet and fall in love and statistically (this is just statistics--obviously this is an all-or-nothing event) 25% of their children get the little "a"s instead of big "A"s in the punnet square, where complications like cystic fibrosis, PKU, Tay-Sachs, and sickle cell can happen.

Conditions associated with the X chromosome appear more often in men because they only have one X chromosome (thanks, Mom) so any X-linked traits, such as hemophilia A & B, Duchenne muscular dystrophy, and fragile X are expressed.

Out of concern regarding genetic diseases such as the above, genetic counseling and testing isn't such a bad idea. But there are commercial, just-for-fun options as well nowadays. As in, "let me buy you some DNA testing for Christmas, Mom (so I can blame you for X, Y, and Z traits.)" 23andMe is one of those genetic testing companies everyone loves to hate, but since I already gave them my $99 and they send me new results as science/databases advance (or become less ethnocentric), I read them.

Apparently I don't have the Angelina Jolie breast cancer genes (don't have her breasts either), or ones associated with higher risk of Alzheimer's or Parkinson's. Nor do I have the genes coding for diseases Asians don't generally get (cystic fibrosis, Tay-Sachs, sickle cell, etc.)

I'm also not lactose intolerant though the results predict "likely intolerant," and for the record, I deny being "likely at least a little unibrow." 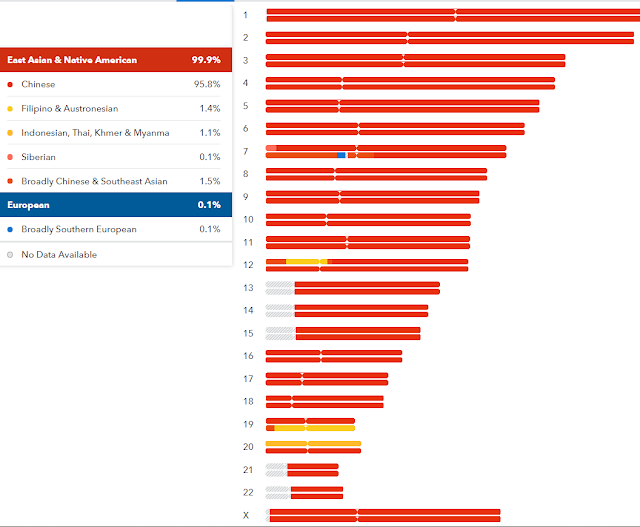 After the four new categories 23 & Me recently added to East Asia, I am now ever-so-slightly less inbred. Still mostly red licorice, though. (0.1% what kind of southern European?)
Labels: DNA